In an effort to try a bunch of different varieties of tea, I selected a rooibos in my last order from David’s Tea named Currant Affair.

From the website, it contains rooibos, sweet blackberry leaves, blackcurrant and cream flavoring. 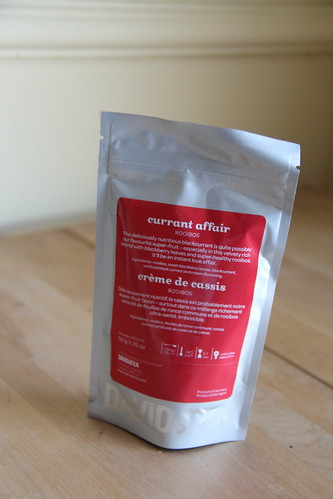 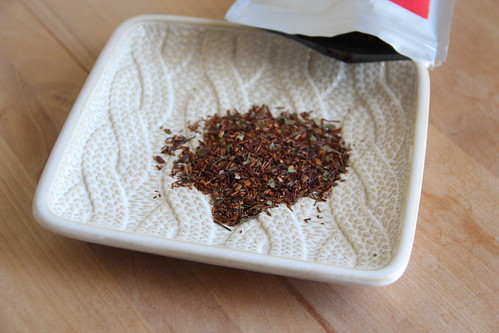 I have to say, when I opened the packet and smelled this tea, I didn’t like it at all. I couldn’t put my finger on what it was I didn’t like about it, but something was not pleasing about it. I was disappointed since I’ve been pretty happy with the other selections from David’s Teas.  Today I tried brewing it and it occurred to me what I disliked.  This particular blend smells disturbingly like cough syrup, both in the package, and as it is brewing.  I don’t know whether it’s the rooibos itself (which I’m finding I don’t really care for) or if it’s the combination of the rooibos with the currant and blackberry.  The taste of the tea is milder and much more berry-like, but I still can’t get over the smell as I’m drinking it. Honestly, I didn’t finish the cup of tea and I’m probably going to toss the packet.

I feel badly for saying any of this, but I’ve decided that the blog shouldn’t just be about the teas I really enjoy, but should include honest reviews of everything I drink.  If you’ve tried this blend and feel differently, please speak up!